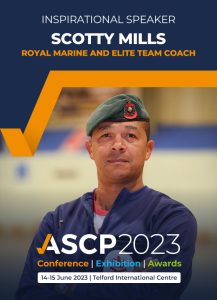 We are excited to announce our 2023 Inspirational Speaker for June’s Conference – Scotty Mills, Royal Marine and Elite Team Coach.

Scotty, the highest-ranking black officer in the history of the Royal Marines, has led the kind of life that most of us can only dream of! From the tough backstreets of South London, Scotty has gone on to serve both Queen and country and lead Britain’s Commandos on operations around the globe as a Royal Marines Officer.

Scotty joined the Royal Marines by chance after ducking into their recruitment office to avoid a downfall. He worked his way up to become a Commando ‘Green Beret’ Officer, leading the Marines on operations around the world.

After a 32-year career leading the Commando Green Berets, Scotty now works with the nation’s top sports teams and Olympic teams to develop innovative leadership, team cohesion and peak performance. He has built up a strong reputation for being able to inspire others to reach their full potential. As a key advisor to the FA, Scotty inspired Gareth Southgate, Harry Kane and the rest of the England football team to the 2018 World Cup Semi-Final. Innovative leadership and team cohesion training enabled them to unite and perform when under pressure from Russia.

A world record breaker for leading the Marines to break a long-standing Endurance Marathon World Record, Scotty was selected as an Olympic Flag Bearer at the London 2012 Olympic Games and has dined at Buckingham Palace with the Queen. He was also the recipient of a national award to honour him as the most inspirational serviceman across the entire Armed Forces community.

At the Conference Scotty will share his compelling journey highlighting the power of human inspiration. He will inspire us with how to achieve impossible results and how to create a winning team in any organisation. 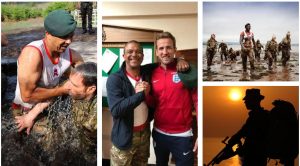